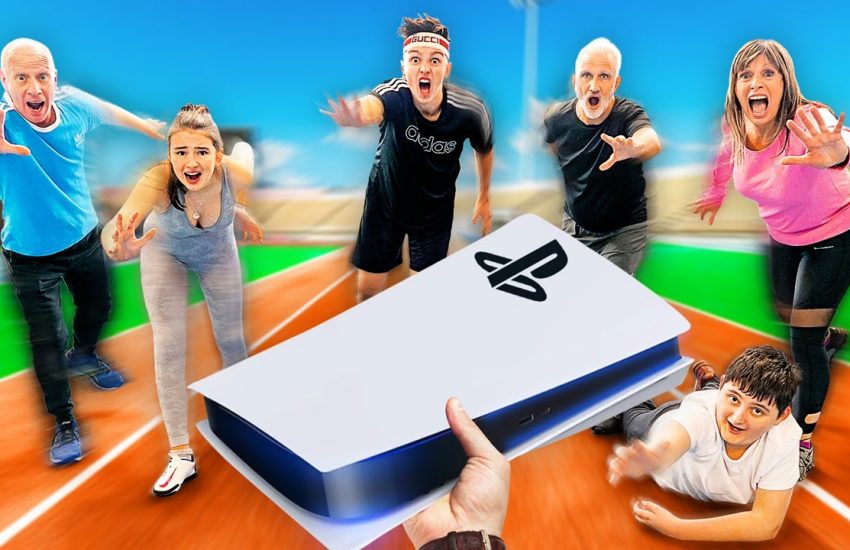 I Challenged the Morgz Squad to Win Anything they want in this Ultimate Olympics Challenge competition including all different sports chosen by the Spin the Mystery Wheel. Find out who in the Squad (Morgz, @Morgz Mum, Bald Martin, Mini Morgz, Morgz Dad & @Tamzin Taber) can run the fastest, jump the longest, throw the furthest and more! Similar to other "I'll Buy You Anything" Challenges, the winners of each round get to chose any prize they want, including expensive items like the Sony PlayStation 5 (PS5) and more! Enjoy this funny and competitive challenge to see who in the family wins the most items!

Morgz: Today, we are in one of the best sports centers in the entire country. Today we're going to head in loads of challenges and the winners are getting prizes. Introduce yourselves.

Tamzin: My name is Tamzin and I'm in it to win it!

Bald Martin: My name is Bald Martin.Any challenges to deal with strength? I've got it!

Jill: My name is Big Jill and I'm doing this for the old people.Yeah!

Jenson: My name is Jenson and in my spots day I only came second last in the egg and spoon race. So I am confident for today

Morgz: My name is Morgz and I'm too tall to fit in the camera shot! These long legs are gonna take me to victory.

Darren: My name is Darren and I'm gonna beat this set of losers. I'm gonna go out with a car full of prizes. Let's do this.

Morgz: Okay, guys, the first challenge we're gonna be doing is the egg and spoon race.

So hold on does that mean the winner is?

Guys after checking the video footage I have made a shocking discovery. As you can see it's looking like it's gonna be Tamzin winning then she drops her egg, then Darren comes rolling in and looks like he's gonna get the win but he drops his.
Martin goes back and gets the win and then mom follows in seconds.
Then Tamsin goes back to try and get hers but fails again. And then both her and Darren decide to just give up. Meanwhile, I'm busy filming the whole thing. So the only person that finished the race was Jensen.

Jenson: Yeah.The best I've ever done in my life.

Bald Martin: Now it's time for me to go and get my prize!

Okay, guys, I've just arrived at the food warehouse. I don't want any clothes. I don't want a laptop There's something I want even more and it's making my mouth water just thinking about it. I want my favorite food Look at all these beans!
I'm eating good tonight.

Morgz: This event tests how far you can jump in all about who can jump the furthest and who has the longest legs?

Tamzin: Hang on a minute! You have the longest legs! This isn't fair!

Morgz: Oh shut up! Whatever! Jenson get up here your first!

Jenson: okay guys I'm not really sure what I'm doing but I'll figure it out

Morgz: oh I think he's ready guys! three, two, one go! Jenson What did you do? You didn't jump! You're supposed to Jump!

Morgz: Guys, he's gone all the way back for his run-up!

Darren: Guys, I just measured it and I have done 3.7 meters! I think they are gonna have a tough time beating that!

Tamzin: OK, It's my turn next and I am doing this for the girls! Come On! Guys, well I didn't do too well but I got 2.8 meters and that isn't far off Darren!

Jill: Guys, it didn't really work out. I got confused after seeing what Jensen day and I just copied him. Apparently, I got 0.3 meters perhaps that's a good score, maybe, but not a winner?

Morgz: Okay guys this is the event I've been waiting for. I've got 3.7 to beat and it's a big score.
Don't underestimate my lanky body!
What use is my long stupid legs if I don't win this event?
You know what guys? I may not be taking home a prize but I think I'm taking something else home. Sand! Because it's all over me!

Darren: Okay guys, so I'm in a cool technology store where I'm getting to pick my prize that I won in the long jump.
check this out, look at this guy's it's a flipping hover board! it looks insane!
This is definitely gonna help me out because, knowing me, I'm gonna get loads of injuries in this video! Come on! I'm getting it!

Morgz: Okay guys, the next event is the shot put. This one really just measures strength. These balls may not look it but they're really, really heavy, and pretty much you just got to throw them as far as you can go!
And whoever throws the furthest is gonna win
Is everybody ready?

Jill: Ok Guys, it's time for me to go and this is the heaviest ball I have ever felt!

Jill: I may not have done very well on the long jump, and you lot were laughing at me…but I am very good at throwing my balls.

Morgz: OK, I am going next. I don't know why I chose to go next because when it comes to strength, I ain't got a lot.

Jill: He's a little weakling
Darren: His arms are like bits of string!

Morgz: Hey! You don't have to be mean now!

Morgz: What, it went further! This is an outrage! We need to go to the instant replay.
Guys after reviewing the footage there's mom's and there's mine and they both land at the same time. They're so close like they land in the exact same place!

Crowd: No they don't!

Morgz: Everybody, comment down below and let me know who's you think went further! But, you know what? I give it to Mum this time!

Jensen: OK guys. now it's my turn and I'm going to beat all those pathetic scores. I don't really know how I am supposed to throw them, but I'll do them how I want.

Morgz: Well done Jensen. If you were listening to these guys I would say you probably got further than me anyhow.

Tamzin: I have no muscles, but I definitely won't win.

Tamzin: I have done worse than Jensen!

Darren: So, after watching those shambolic attempts at throwing a shot put, this is how it's supposed to be done!

Darren: It wasn't very good at all but it's beat that lot! Here we go guys I'm moving forward to where it landed. Actually, they're not looking, watch this!

Bald Martin: Yeah! Easy! I told you all! Let's go and get me another prize!

Bald Martin: OK guys, as you can see I am back at the food warehouse. It feels good to be back!
Earlier today. I came here and I got the beans. Now it's time to complete my meal and get my final ingredient. The burgers!
Oh, look at all these burgers. I'm gonna have loads of beans and burgers tonight!

Morgz: Okay, guys, as you can see, the next event is slightly different guys. This one is basketball.
Now, I myself have never really played basketball so I don't know how this is gonna go, but pretty much the aim of the game is just to score a three-pointer and the first person to score one wins.
Well, you know what guys? I'll kick it off. I'll go first.
I'll get it in first try. There we go!

Morgz: There's no second or third place but as you can see in first place is Jensen.

Jensen: Okay guys, we came to the gaming store. I can't wait to see what my prizes gonna look round and find something epic.
So my gosh, yes. PS5 coming soon. Oh my gosh, guys, you can per-order it from the store. You know what? I'm gonna do that. I'm gonna per-order the PS5 I'm gonna be one of the first kids to get it!

Morgz: Okay, guys, the next event is the High Jump. Where you have to jump high? I guess that's about it. Really?
We're gonna start low and get higher and higher. I'll go first.
No problem. Ladies and gentlemen. I could do that for days.

Jensen: Forget the high jump I suppose I could be doing Limbo instead.

Morgz: As you can see left in the challenge is me, Martin, Tamzin and Darren now let's higher the bar.
There we go, guys. Let's go!

Morgz: Okay guys we are now down to the final two is me and Tamzin and once again guys we're raising the bar!

Tamzin: okay guys as you can see I've come to the designer shoe store these are it for me.
These are super nice so nearly as nice as me. Look at how sparkly they are. How much are these? 368 pounds! A pair of 400 pounds shoes just for winning the high jump? I'll take them!

Morgz: okay guys this is it's time for the moment that I've been waiting for this whole time. I am still yet to win an event.
I've been cheated in my opinion out of a lot of them.

Crowd: Cheated? I've not won either

Morgz: Shut up, Shut up. But now is the big one the one that's made for me, the sprint. Oh my goodness! There's no eggs and spoons to save you guys this time.
Since this channel is all about speed. I've got a challenge for you guys. Can you subscribe to the channel and like the video in five seconds 54321! Let me know if you did it, guys.
Time for the big race

Official: Whoa, Morgan. I've got something to tell you.
Morgz: What, what's got What's going on?
Official: I've just checked the footage and your mom had a false start. Her foot went over the line before it was time to run.
Morgz: She's disqualified right?
Official: No, the result doesn't stand we need to run again.

Morgz: No, no, no! Who employed you? You're the worst official!

Morgz: I want to go and get our prize guys! I'm not doing any more exercise for a long time!
Okay you guys seeing as I won the final race I think it's only fitting that I get the best prize!
As you can see behind me, I have come to a car garage but not just any car garage, it's a Porsche Garage! That's right baby, for my prize I am gonna win a super car!

Guys, it looks absolutely insane, I really do want to buy it!
Tamzin: Morgz, you do realize that you will have to be paying seeing as it's your video?

Morgz: Oh yeah? I forgot about that! Everyone, 100,000 likes and I will buy the car.
Comment down below if you think I should and don't forget to subscribe guys.