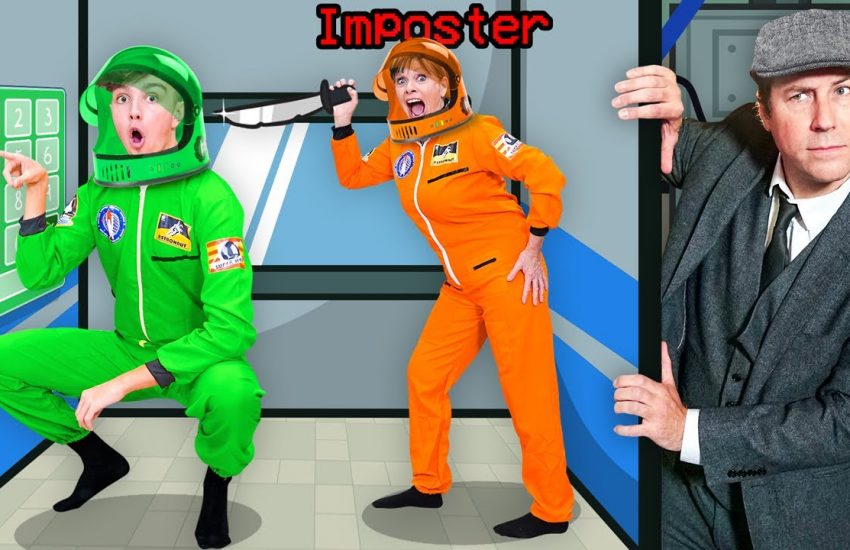 Among Us In Real Life vs REAL DETECTIVES! We played an imposter vs crewmates Among Us IRL game with actual detectives. If you're a crewmate, you have to try and not get caught by the imposter, with detectives watching every move. If the crewmates complete all the challenges without being caught, they win. In this Among Us IRL challenge, it's the Professional Detectives vs Morgz vs @Morgz Mum vs Bald Martin vs Morgz Dad Darren vs Mini Morgz (Jenson). Watch to the end to see who won this in real life game and if the Squad could beat the detectives!

Morgz: I challenged a team of real Detectives to play Among Us in real life inside a space-themed arena!
We picked six crewmates and two impostors at random!
The crewmates need to complete the tasks and the impostors need to eliminate them
without getting caught.
The winning team get five thousand dollars each!
Who's gonna win? Watch to the end!
Is everybody ready to play Among Us in real life?

Morgz: There are two impostors this time guys, so it is not going to be easy!

Morgz: I'm just going to get started with this task right here. I have to find
the M&M in this massive pile of Skittles!

Mum: There's Detectives everywhere!
Detective White: This is harder than I thought!
I'm supposed to be the Detective!

Detective Black: I can see the other Detective let me get out of the way from him!

Detective Brown: The problem I've got is I don't know if the Detectives are the imposters.

Jensen: No trust me I'll watch!

Morgz: She looks okay.. she looks like she's doing the task!

Detective White: What is he doing?

Morgz: You know what guys, I'm just gonna try and keep my distance away
from the Detectives!

Mum: Guys, I need to find Martin so that we can plan what we're going to do!

Darren: I'm trusting Jensen here so much! One, two, three!

Detective Brown: Right I'm just gonna watch him from a distance to make sure he's doing a task because if he isn't doing it that means he's the imposter!

Mum: Meeting! I call a meeting!

Morgz: Okay guys, a meeting's been called but as far as I can see everybody's still here, so who called it?

Mum: I called it!

Mum: I was upstairs and I was trying to do the rice and then I kept seeing the two Detectives skulking around!

Mum: They just looked sneaky and I felt suspicious!

Detective Brown: Part of our job is to detect. We're there to watch everybody else!

Morgz: Okay, okay, whoa, whoa whoa I'm just gonna put this out right here because
I don't think there is enough information. All I'm hearing so far is a load of waffle, pretty much. I'm hearing a load of nothing. Obviously, just like all of us the Detectives are gonna be on the lookout to try and figure out who the imposters are so i think it's pretty normal that they would be looking around. However, there is always the chance that the Detectives could be the imposters so we do have to keep our eyes on them. I'm going to vote skip.

Martin: me too it's a skip!

Mum: I just don't know which one to vote for so I'll skip but I'm going to be keeping
my eye on those two!

Jensen: I know who is safe..Detective White, Darren, Morgz… I vote Jill!

Detective White: I did see Martin and he did look suspicious so I do think I'm gonna vote for you!

Detective Brown: I still haven't seen a body until then I can't do my job so I skipped.

Detective Black: Well, I haven't seen a body either and that's what we get paid for but at this present moment I'm going to skip.

Jensen: I'm going to finish this task that I was doing.

Guys, the strategy is that Martin is going to get Darren.
I'm gonna just do a task now. Well, I'm not really gonna do it!

Darren: I might just follow Morgz! Someone's definitely going to get killed soon. I'm just going to stay out of the way and play the long game here!

Mum: Detective Brown is following me. I might have to leave the task and go!

Morgz: Okay guys, looks like a push-ups task has been done. I'm going to go and try and find a
new task to do.

Darren: So this is unbelievable I've just been caught!

Morgz: Guys, I'm still not really sure who the imposter is! I haven't really got suss on anybody.
I haven't found any dead bodies yet. I think I'm going to go to the top floor to see if I can find any bodies up there.

Jensen: I think it might be Martin, Detective Black!

Morgz: Okay. Who called the meeting and why?

Mum: Me! I called the meeting again.

Mum: It's the only person who's missing! Darren!

Morgz: Oh my gosh the first person has fallen guys, and it's my dad but does anybody have
any source.. Mum, where did you find him?

Mum: I found him right here in the meeting room near the card's task.

Morgz: Did you see anybody round here?

Mum: No this is a weird thing i came down and i didn't see anybody.

Martin: So nobody was here apart from you?

Detective Brown: You must have seen something otherwise that in itself is suspicious.

Jensen: Before we all start blaming Jill, me and Detective White were upstairs watching Detective Black. We was watching to see if he was gonna do the rice task, but he walked away.

Morgz: Now I have to say I did see Jensen and Detective White at the start of the game complete a task each at the same time as I completed the Skittles and M&M task, so I'm pretty confident that it's not either of them. However if they're saying it might be you Detective Black then I have no reason to believe that they're lying i think it could be you.

Mum: Well at the beginning, he was following me around upstairs and I think just because other
Detectives were there and he left me alone.

Martin: Same here you were following me.

Morgz: Well in that case, I've got four people all saying they saw the same thing. Detective Black walking around and acting suspicious, backing off from people, not doing the tasks. I'm going to start the voting right here. I'm voting for Detective Black.

Martin: And after what I saw up there I'm voting for Detective Black.

Jensen: I say we all vote Detective Blackout!

Detective White: First, we're gonna vote Detective Black out but if he's not an imposter
then I might start voting for Martin because I definitely didn't see him all that round.

Detective Brown: I haven't got any evidence yet I've only got suspicions so I have to vote skip at this point.

Detective Black: Well, it looks like from the voting that I'm out so…

Morgz: Wellguys, that means that there is six of us left and two imposters. We've made a big
mistake voting off Detective Black.

Detective White: I think it might be Jill and Martin. She's not even
trying to kill me so is she really an imposter?

Morgz: Guys, here we go it's time to do this bottle flip task i am not very good at bottle flipping so this is not going to be easy!

Detective White: I really knew it was Martin! I was right the whole time!

Morgz: Okay who called the meeting?

Morgz: Martin, why did you call it?

Martin: Detective White were on the floor dead!

Jensen: No…may she rest in peace or should I say rest in pepperonis!

Morgz: We've lost another crewmate… there's still two impostors among us.Martin you need to fill us in. What did you see

Martin: See, this is a problem. I didn't see anything.

Detective Brown: Can I point out that all the Detectives are being killed.

Morgz: I do find it really suspicious as I said that Mum and Martin both found a body and both
just so happened to stumble across it.

Morgz: We have a massive decision here. If we skip that means the two imposters just need
to kill one of us the game is over if we skip!

Jensen: I agree Morgz since Martin called it I Say we should vote out him for two reasons:
One, he called it and two, he's probably the better imposter.
I and pretty much anyone with a brain would vote Martin, so I vote Martin.

Detective Brown: So you're saying Martin so it'd be a wasted vote for me if I vote for anybody else. The process of elimination says I've got to vote for Martin.

Martin: Because you find a dead body doesn't mean to say that you murdered them.

it's too late Martin. My vote is cast! Three votes for Martin, two for skip… it's over Martin reveal what you are!

Morgz: Four of us remain three crew mates, one imposter..let's do this!

Detective Brown: I'm going to keep an eye on Jill as much as I can but is that going
to be enough?

Morgz: Martin has been eliminated from the challenge. He was voted out.Martin was the imposter, now does that mean that it's Mum as well? I don't know. I still haven't actually
caught any dead bodies yet.

Mum: I'm just trying to get to the rice task to do it.

Jensen: Okay, do it.

Morgz: I'm gonna get back on with some tasks guys.

Mum: This is not me sabotaging the rice, this is just really impossible!

Morgz: Whoa! hang on a sec guys, I think it's been sabotaged!

Okay, I thought Jensen said he did this task that means it's been sabotaged that
means the imposters sabotaged this task. This is insane guys,I have no clue who
it is.

Detective Brown: I'm pretty sure it's not Jensen otherwise i'd be dead now.

Jensen: Jill just missed two tasks that she could have done.

Mum: I need to find someone.

Morgz: Doesn’t look like Mum's doing much down there guys, she's
more interested in filming me right now!

Morgz: Okay who was it that called the meeting?

Mum: I was gonna call the meeting and Jensen got his whistle out first!

Jensen: Jill killed Detective Brown right in front of me!

Jill: He killed Detective Brown right in front of me… you need to make the right choice.
Jensen has never shut up throughout all this.

Jensen: Because I was right!

Mum: Too vocal, too vocal..he’s been talking too much.

Morgz: I think we need to calm down here, calm down. Clearly Mum thinks it's Jensen, Jensen
thinks it's Mum…they're gonna vote each other here that means this is down to me. Jensen or mum. Now I haven't seen Mum too much this game however, a few minutes before the kill I was
upstairs and I did see Mum downstairs.
She was walking around kind of aimlessly but if you're saying the body was found upstairs that's not where Jill was.

Jensen: Oh my god Morgz, you can do the right thing and vote forJill or no offense, you could vote for me and be an idiot. I vote the imposter which is Jill

I am gonna vote for Jensen imposter!

Mum: Hahaha..he knew he was you all the time!

Jensen: Oh you've made a terrible mistake so terrible..so terrible that it lost us the game!

Mum: I was the imposter!

Morgz: Massive shout out to Laser Quest Sheffield for letting me film in that
amazing venue check them out guys!